The Chancellor presides over the Council and plays a key role in official functions at the University, including at graduation ceremonies.

As Foreign Minister, she was responsible for strengthening Australia's key strategic and economic relationships with Ministerial responsibility for more than 5,000 departmental staff, 110 overseas missions as well as government agencies the Australian Secret Intelligence Service and the Australian Centre for International Agriculture Research.

In 2014 she led the international response to the downing of Malaysian Airlines flight MH17 over Ukraine, and was awarded the Commander of the Order of Merit of the Netherlands Ministry of Foreign Affairs.

Under her leadership, the 2017 Foreign Policy White Paper was developed, providing a comprehensive policy framework for the subsequent decade; and the New Colombo Plan was established, enabling Australian undergraduates to live, study and work in the Indo-Pacific region. Within five years more than 40,000 students had participated in the Plan.

In a political career spanning over 20 years, Julie also served as Minister for Education, Science and Training, Minister for Women's Issues and Minister for Ageing.

Julie's relationship with ANU began when she was Education Minister in the Howard Government, when she also established the $10bn Education Endowment Fund to invest in higher education and research.

Prior to entering politics Julie  was Managing Partner of the Perth law firm Clayton Utz.

She graduated with a Bachelor of Laws from the University of Adelaide in 1978 and was awarded an Honorary Doctorate in 2017 for her exceptional service to Australian politics.

Julie completed the Advanced Management program at Harvard Business School in 1996. She is a fellow of the Australian Institute of International Affairs.

Currently, Julie is Chair of Telethon Kids Institute, Chair of Prince's Trust Australia, a member of the international advisory boards of Afiniti and the Human Vaccines Project and is the Patron of Shooting Stars - an education program for young aboriginal girls.

In 2020, Julie was awarded a Fisher Family Fellowship for the Future of Diplomacy Project at Harvard Kennedy School Belfer Centre for Science and International Affairs. In 2021, she was awarded the Kissinger Fellowship at The McCain Institute of International Leadership, at the Arizona State University. 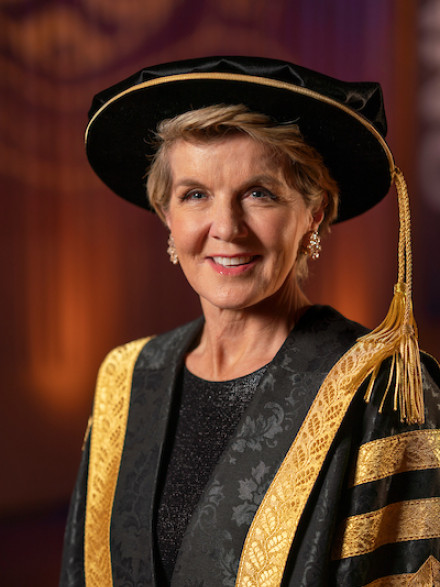