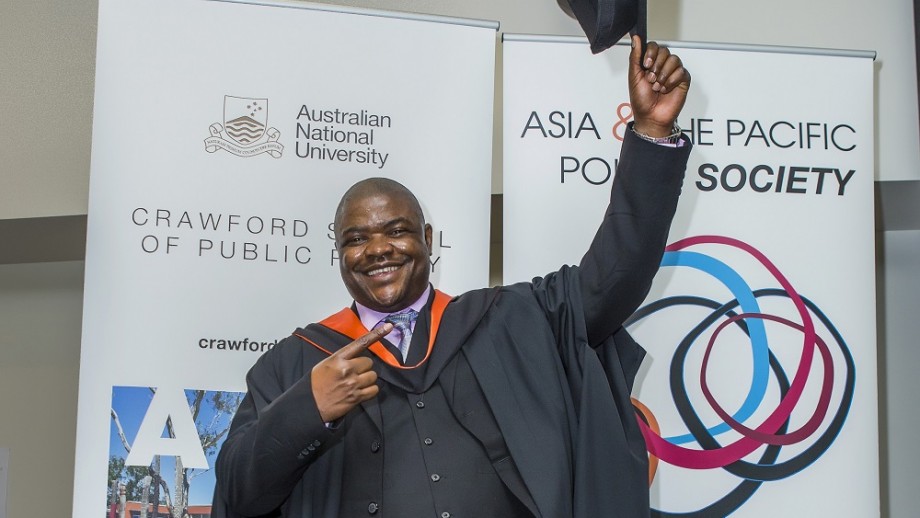 I came to Crawford as it's a place to refine the capabilities of global and emerging leaders, and as such, it brings together students of diverse backgrounds

2014 was a big year for Crawford graduate Thomas Kaydor who celebrated his graduation, published a book and was appointed Deputy Foreign Minister for International Cooperation and Economic Integration of Liberia.

The Master of Public Policy student is no stranger to Liberian politics, previously holding the position of Assistant Minister for Africa, Asia and the Pacific in Liberia before studying at Crawford School.

The President of Liberia appointed Kaydor to his new role on 2 December 2014 - two weeks before his graduation from Asia and the Pacific’s leading public policy school. His responsibilities in the Ministry of Foreign Affairs include coordinating all bilateral and multilateral development programs and projects of Liberia.

“Studying at Crawford School prepared me with the strategic skills to manage Liberia’s development priorities. I’m confident I’ll be able to lead the Liberian Foreign Ministry with the skills I learnt from Crawford School,” said Kaydor.

While Kaydor wasn’t in Australia for long, he wanted to make the best out of his limited time here – researching, writing and publishing a book on Liberian democracy. He also remained committed to mentoring and encouraging fellow postgraduate students to submit their top essays to be published in the book: Global Perspectives on International Affairs: a collection of essays.

“The best thing about studying at Crawford was that I had a chance to combine academic work with research and publication because the School places a lot of emphasis on research - something that helped me achieve my dream of becoming an author,” said Kaydor.

Kaydor also volunteered as a Representative for ANU College of Asia and the Pacific in the Postgraduate and Research Students’ Association in order to stay connected and represent the ANU student community.

“I cannot measure the value of studying at Crawford in dollars and cents. All I can say is that it is a lifelong and once in a lifetime achievement for anyone to study at such a prestigious school. I think Crawford is the best school in the world,” said Kaydor.

He added that the opportunity to study with fellow future global leaders was an honour and provided him with a well-rounded Australian educational experience.

“I came to Crawford as it’s a place to refine the capabilities of global and emerging leaders, and as such, it brings together students of diverse backgrounds.

“Crawford is a place for scholars to gain new insights for transforming the world. It presents an arena for leaders to rediscover their capabilities and become original thinkers, creative agents, and the fulcrum for growth and development in society,” said Kaydor.

Not wanting to waste any time, a few weeks after graduating and arriving in Liberia, Kaydor sat down to write a detailed strategic plan for his department to ensure he could use his skills from Crawford to help Liberia.

Living in Australia while his family and friends remained in Liberia was challenging, but the biggest hurdle was watching his country suffer, fight and survive the deadly Ebola virus that is devastating Africa.

“I’m grateful for my family to have survived the Ebola virus that ravaged the socio-political and economic fabrics of Liberia, Guinea and Sierra Leone. Today, there are only ten Ebola cases left in Liberia. This is a remarkable achievement. I would like to thank the people and Government of Liberia for battling this virus to a point where the country will soon be declared an Ebola free nation,” said Kaydor.

Saying goodbye to Australia was a tough challenge for the proud graduate who remembers his time in Canberra fondly.

“I miss Australia so much. I miss the cordial friendship and warm embrace of the people, the excellent public transport system, the facilities (an elaborate 24-hour economy, fast internet, endless supply of electricity and water) that are easily taken for granted. But seeing these luxuries challenges me as a leader to do my job and advocate and work for a prosperous life for the people of Liberia, Africa and the entire world. If Australia and Australians can thrive, then Liberia and all other countries can also thrive,” said Kaydor.

Kaydor’s advice to current and future students was simple.

“Students and graduates of Crawford must be the change they wish to see, and they must be leading examples of change and transformation in their communities. Our role is to research, publish and transform lives. Above all, we must keep our connections through the Asia and the Pacific Policy Society with Crawford and ANU. Together we can make the world a safer, secured and prosperous place for all,” said Kaydor.