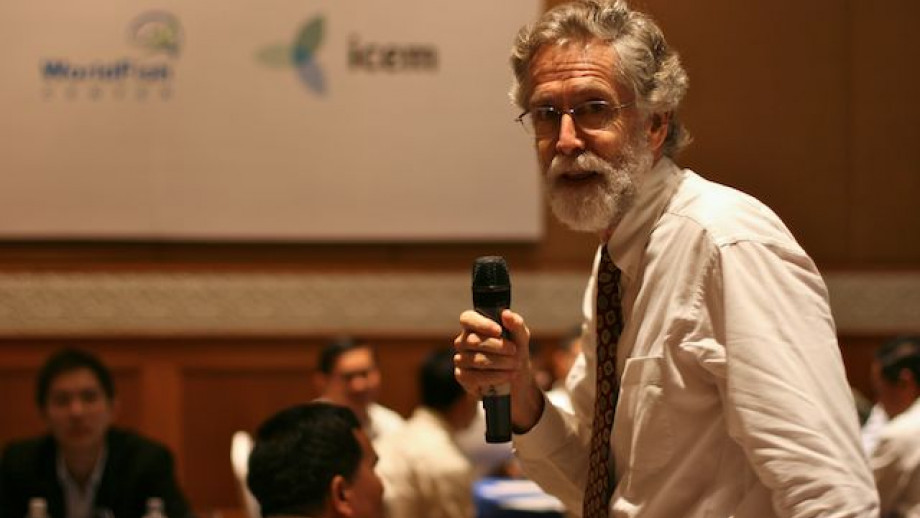 Dr Jeremy Carew-Reid is Director General of ICEM - the International Centre for Environmental Managament. ICEM promotes ecological sustainability with a focus on the Mekong region.

Jeremy is based in Hanoi, Vietnam, a city which he has called home for eight years. He enjoys living in "a lovely, rapidly evolving city with strong forces of anarchy running through all aspects of life". He believes that all students should experience life in other cultures as a way of understanding and embracing difference and diversity:

"Find a way to live and work in a developing country for a time during or after your ANU degree, even if it means volunteering".

While a student at ANU, Jeremy had a special interest in fresh water ecology. The rivers and lakes in and around Canberra were a pleasure for naturalist study, including the Molonglo catchment, despite what he recalls as "the damage caused by mining and insensitive development".For a time he lived in a caravan on the river close to the tiny Canberra airport remarking: "you could do that then".

Jeremy's undergraduate years at ANU were a time of intense student political activism against the war in Vietnam, apartheid in South Africa, US activities in Latin America and the growing inequalities in income and welfare in Australia. Jeremy says:

"It was a period of awakening for me: letting in some bright light on what until then had been a pretty self-centred and ignorant existence".

The beautiful ANU campus left an indelible mark on him:

"The campus back then still had the feel of savannah woodland backing up onto Black Mountain with it's numerous Yellow Box, Red Gum, Apple Box and Candle Bark gums - all labelled by the Botany Department - and the Kapok trees around the library which snowed at exam time".

Studying at ANU furthered his fascination with nature and his belief that its conservation is the basis for human wellbeing.  He is hopeful that current students will also maintain strong connections with the environment no matter how busy life becomes:

"Regularly refresh your energy and peace of mind by getting into the forest, rivers and coast and reconnecting with nature. Find a way you can contribute even in small ways to bringing nature back".