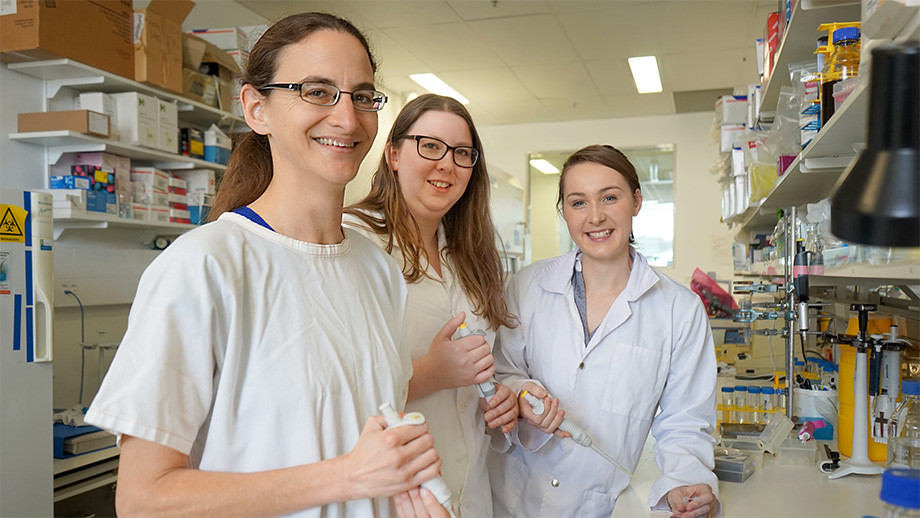 Lea was someone who spent her entire life giving love, compassion, and support to all she met and shared her life with. She valued and adored people more than anything, and for her to be able to continue this after her passing would make her immensely happy and valued."

The first ever investigator-led Phase 1 oncology trial at the Canberra Hospital is more than halfway through.

As leader of the Fahrer Group at The Australian National University, Associate Professor Aude Fahrer and her small team are trialling a novel cancer treatment that involves injecting a slow-release bacterial preparation as an immune stimulant directly into a cancer tumour.

The research behind the trial has been generously supported by donors to the Lea Chapuis Memorial Fund. Lea was the Principal of Yarralumla Primary School, a close family friend of Aude and a cancer patient.

"Lea followed my research for many years and had volunteered to take part in a clinical trial. Sadly, she just missed out as she got too sick. One of her final wishes was that people would make donations to the Fund in lieu of flowers at her funeral," says Aude.

Two years after the untimely loss of Lea, the generosity of her family, friends and the community has made an incredible difference to the Fahrer laboratory.

"It has kept our research going and it's supported some brilliant young PhD students," says Aude.

"The most encouraging part about the trial for me so far has been that we've shown the treatment is safe and we've had evidence of efficacy. One of the real benefits is that the treatment is so inexpensive and simple that it can be used everywhere in the world. It also has few side effects, which is incredible compared to the horrible side effects of chemotherapy."

As Aude and her small team approach the second part of the trial, she is hopeful that they can answer some fundamental questions with the potential to save lives.

"We're trying to figure out the exact mechanisms of how these bacteria are stimulating the immune response to kill cancer and how we can use that knowledge to improve the treatment. If we can improve it, we could then combine it with other therapies to potentially cure a lot of people. An ideal outcome would be for patients to completely avoid having chemotherapy."

Aude is immensely grateful for the difference that donors to Lea's Fund have made to her team's research, saying that the Fund will continue to support improving a cheap, simple and potentially life-saving cancer treatment.

Every donation to the Lea Chapuis Memorial Fund makes a difference. For example: