» Alumni » ANU75 features » From debating in the dining room, to the world stage

From debating in the dining room, to the world stage 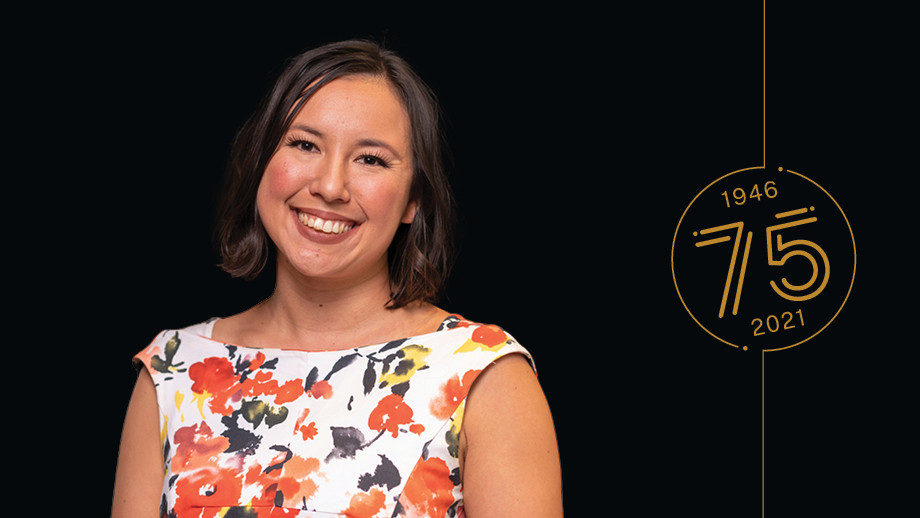 I grew up in a tiny fishing village in Queensland that has population of around 800 people. I went to public schools and definitely had a very rural upbringing.

Arriving at The Australian National University's Bruce Hall in 2006 - as this small town, country girl - I walked into the dining hall and was in complete awe. It was filled with people from all over the world, all walks of life, every political persuasion, and a variety of philosophical viewpoints. And we all sat down at the dining table, eating every meal together.
Bruce Hall broadened my horizons, allowing me to connect with and understand people that I may have otherwise never met. My peers challenged me intellectually, and would often respectfully disagree with my views, which allowed me to create more robust opinions about who I am, what I am, and what I think.
Through my experience at Bruce Hall, being around so many different people, being challenged and being rebutted, I learned how to pick myself back up and try again. I think that could be one of the biggest skills I honed at ANU - the ability to engage with anyone, understand multiple frameworks of engagement and the complexities around issues - particularly issues that affect everyone, like climate change.
I've always been interested in creating social impact, and when I graduated from high school my ambition was to one-day run a charity. So, I was studying a Bachelor of International Business at ANU because I knew that the sector really needed people who understood how to run a business and develop sustainable practices. I thought if I could learn how to run a robust business, I could transfer that back to the charity sector.
It was during my undergrad that I learned the concept of Social Corporate Responsibility. That shifted my focus away from thinking that running a charity was the biggest way to create social impact in the world. Instead, I started to investigate changing models of stakeholder capitalism and ended up starting a PhD on the topic. A group of us PhD students were selected to attend a leadership course and Professor Brian P. Schmidt was one of the supporters of the program. That is how I first met Brian, who hosted us for a dinner and ran some of our leadership modules. Since meeting Brian during that course, he's been a very active supporter of my career trajectory and, more recently, of my company MCi Carbon.
MCi Carbon has developed a scalable carbon platform technology that safely captures and converts industrial CO2 emissions into solid bulk materials used in new low-carbon products for construction, manufacturing and consumer markets - enabling a circular economy.
In 2021, MCi was selected by the Australian Government to represent the nation at the COP26 pitch battle in Glasgow. It was a very important time to be talking about increased climate ambition and the kinds of action that industry and global governments should be taking in order to achieve the lofty goals that they had been setting in the months prior to COP26.
When I won the pitch battle with MCi, Brian was very active in sharing the news and helping us build momentum around it. He was also active in supporting and endorsing my application to become a young global leader of the World Economic Forum, which was a successful application and I'm one of only two people from Australia to be inducted this year.
When I was at COP26, I was invited to sit at the Prime Minister's Business Roundtable. I was sitting with the Prime Minister, the Minister for Energy for Australia, and key business leaders of Australia including CEOs of Rio Tinto, Santos, Macquarie Bank, Fortescue Metals - really big household names.
In a way, I was reminded of my time sitting down at the dinner table at Bruce Hall. All these people were business leaders, responsible for so much of our way of life in Australia - the delivery of our energy, resources, and so much of our GDP. But at the same time, they were humans. Being able to make connections and have conversations with these people, as humans, was one of the greatest opportunities I've ever had. I honed those skills starting at Bruce Hall, by having to find in common with people who you don't have a lot in common with. But you can always find something - and that is where you can really get people on side and make a difference.