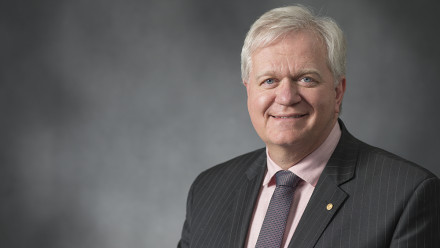 The Australian National University is a unique asset for our nation, and one of Australia's foremost academic and cultural institutions. Throughout each year, extraordinarily talented people come together on our campus and in our community to "learn the nature of things" and, guided by our vision and values, to achieve great outcomes in the service of our nation.

2018 was no different, as our academics' work reshaped the way we see the world - and the universe - around us. This year, ANU astronomers had found the fastest-growing black hole yet discovered, while elsewhere our researchers used their expertise to confirm the Earth's inner core is solid, fundamentally shaping our view of our planet. We also released the first comprehensive public database tracking Chinese commercial investment in Australia, and we published a groundbreaking study that indicated a likely new route used by the ancestors of Aboriginal people to enter Australia for the first time tens of thousands of years ago.

Our colleagues have been widely celebrated for their work this year. Professor Xuemai Bai was awarded the international Volvo Environment Prize for her work on urbanisation and urban system sustainability in Asia and globally, while Emeritus Professor Kurt Lambeck received the Prime Minister's Prize for Science. To prove the depth of our academic excellence, the American Association for the Advancement of Science  named an ANU PhD student, Ilya Bobrovskiy, as being responsible for one of the top-10 Scientific Breakthroughs of the Year. Ilya discovered a Dickinsonia fossil that contained molecules of fat 558 million years old, around 20 million years older than we had previously thought animals were walking the Earth.

Through our ANU Strategic Plan, we have created new ways for our researchers to collaborate in addressing the world's most significant problems, most notably through the competitive Grand Challenges scheme. Our 2018 winner is a project investigating how to deliver zero-carbon energy to the Asia-Pacific region through catalysing the development of a major renewable energy export industry, from the infrastructure to the trade relationships and the policy frameworks.

We are determined that our work delivers impact. In 2018, we created with our partners Significant Capital Ventures, which will provide seed investment to companies translating academic research into applied technology, and launched two new Innovation Institutes: WearOptimo, focused on developing wearable medical devices, and the Space Institute, known as InSpace. We also announced seven Translational Fellowships to provide ANU researchers with support and incentives to take their ideas outside ANU for great societal impact.

Our researchers are also our educators, and their cutting-edge work underpins excellent programs that critically engage our students. We seek to educate and inspire our students and future students, represented by this year's successful world-record Stargazing attempt, broadcast live with the ABC and involving over 40,000 people across the nation, all learning about our galaxy. We want more Australians to be inspired to consider joining ANU, and this year, we announced significant changes to our admissions model to ensure talented students in every part of our nation can aspire to a degree from ANU. We backed this up with a commitment to offer a place at ANU to the top two percent of students at every Australian high school, or the top three students if it is a small school, providing they achieve the minimum ATAR entry of 80. We will also assess applicants on the basis of their academic and their extracurricular activities, recognising that an ATAR is only part of a student's broader record of leadership, engagement and service.

One of the proudest moments of 2018 was the launch of the new ANU Reconciliation Action Plan (RAP), a key milestone in our University meeting its responsibilities to Australia and our First Peoples. ANU has never been more committed to renewing our partnership with Indigenous Australia, and to recognising and celebrating the knowledges, cultures and traditions of Aboriginal and Torres Strait Islander peoples. At the First Nations Governance Forum, organised by ANU in June to reignite debate about Indigenous governance reform, we brought Indigenous leaders from around the world to Canberra to discuss their experiences. Later in the year, Geoffrey Robertson delivered the Faith Bandler lecture, and the University launched the Indigenous Research Directory and Compendium near the end of the year to draw together the wide span of Indigenous research undertaken at ANU.

Beyond our shores, ANU broadened its footprint with a new Liaison Office in Singapore, the third of our overseas Liaison Offices, after Washington DC and Beijing. We also launched the Australian Studies Institute to facilitate global academic conversations and integrate Australian perspectives, and further developed our partnerships with Harvard, Kings College London and the University of Indiana, part of our network of global partners. Our academics took their knowledge and scholarship to every part of the world, and we welcomed some extraordinary global visitors to the University to share their perspectives.

On campus, we focused in 2018 on making everyone's experience of ANU the best it can be, working to create the world-leading new facilities that will deliver a new hub - Kambri - at the heart of our community from 2019. At the same time, the new student accommodation buildings, Bruce and Wright Halls, will open their doors to residents, ensuring ANU offers some of the most contemporary and exciting facilities of any university in the world.

Of course, our campus is not just a physical environment. ANU is a community and its culture, and in 2018 we continued to prioritise work to ensure our campus is safe and respectful for everyone. Our new Respectful Relationships Unit began to drive change across the University, and we commissioned independent reviews of our counselling services and our student residences, committing to improve both in line with the reports' findings.

We continued to lead the global debate around academic freedom and autonomy when the ANU Academic Board released its statement on Academic Freedom in July. This was rounded out by an Academic Freedom Summit convened at ANU that explored the relationship between academic freedom and freedom of speech, and asked how universities can protect academic autonomy and what threatens academic freedom. There are few more fundamental issues than these for the national university to debate, and few moments when I am prouder to be its Vice-Chancellor than when we champion and exemplify our values.

Looking back, 2018 was a year when ANU stepped up as the national university. I was inspired and excited to see so many colleagues, new and long-standing, committing to ANU and its role as a truly national resource. Together, we can achieve even more in the years to come.

Use contact details to request an alternative file format.