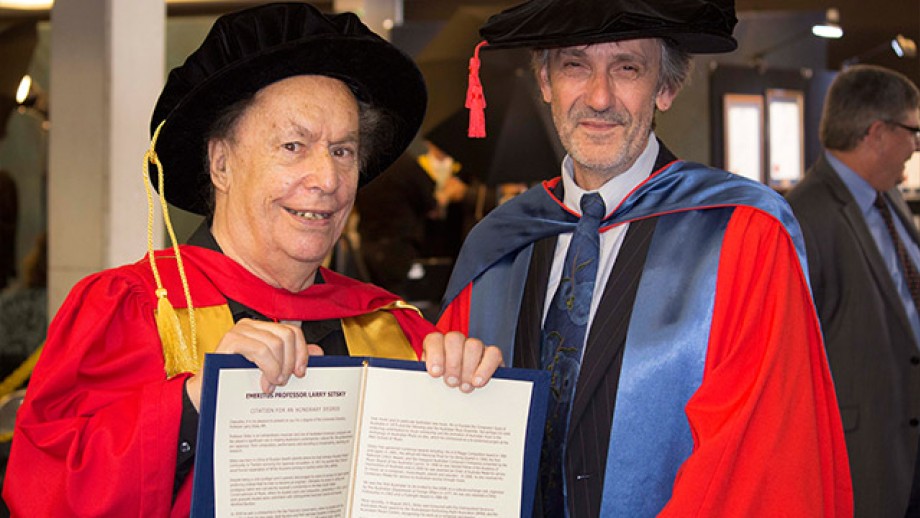 The University has honoured distinguished Emeritus Professor Larry Sitsky, presenting him with an honorary degree in recognition of his contribution to music and music scholarship and for his pioneering leadership at the ANU School of Music.

Vice-Chancellor Professor Ian Young AO presented Professor Sitsky for the Degree of Doctor of Letters, honoris causa, at the first of the 2015 end of year graduation ceremonies at ANU.

"Professor Sitsky is an extraordinary musician and one of Australia's foremost composers who has played a significant role in shaping Australia's contemporary cultural life," Professor Young said.

"His achievements are capacious: from composition, performance and recording to broadcasting, teaching and research."

Professor Sitsky was born in China of Russian-Jewish parents. He arrived in Australia in 1951 and initially studied engineering before turning to music.

He has composed in a range of musical forms including operas, concerti, chamber music and works for solo instruments.

His style is virtuosic, rhapsodic and exciting. His 1963 woodwind quartet, performed at the inaugural Australian Composers' Seminar in Hobart, was a turning point in Australian musical history.

During his career, Professor Sitsky has been supported by a number of Australian Research Council Grants. His areas of expertise include the music of Busoni, Rubinstein, Russian avant-garde music and 20th century Australian piano music.

He has been a champion of new music and particularly Australian new music.

Professor Sitsky has won numerous awards, including the A H Maggs Composition Award in 1968 and again in 1981; the Alfred Hill Memorial Prize for his String Quartet in 1968; the first National Critics' Award, and the inaugural Australian Composer's Fellowship presented by the Music Board of the Australia Council.

Most recently, Professor Sitsky was honoured in August this year with the Distinguished Service to Australian Music award by the Australasian Performing Right Association (APRA) and the Australian Music Centre, recognising his work as a composer and teacher.

"In the 50th Year of the School to which he has contributed so much, it is fitting that we should recognise his extraordinary contribution to it."