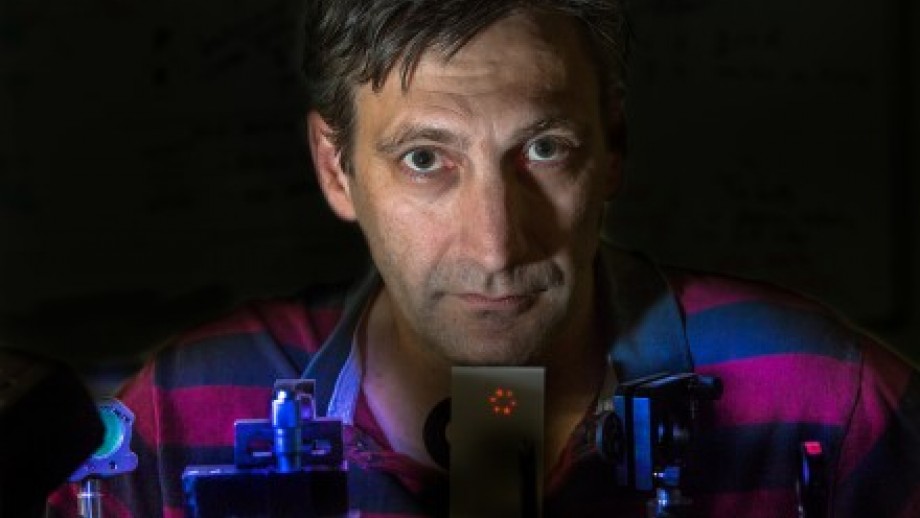 Physicists at ANU have engineered a spiral laser beam and used it to create a whirlpool of hybrid light-matter particles called polaritons.

“Creating circulating currents of polaritons – vortices – and controlling them has been a long-standing challenge,” said leader of the team, theoretician Dr Elena Ostrovskaya, from the Research School of Physics and Engineering .

“We can now create a circulating flow of these hybrid particles and sustain it for hours.”

Polaritons are hybrid particles that have properties of both matter and light. The ability to control polariton flows in this way could aid the development of completely novel technology to link conventional electronics with new laser and fibre-based technologies.

Polaritons form in semiconductors when laser light interacts with electrons and holes (positively charged vacancies) so strongly that it is no longer possible to distinguish light from matter.

The team created the spiral beam by putting their laser through a piece of brass with a spiral pattern of holes in it. This was directed into a semiconductor microcavity, a tiny wafer of aluminium gallium arsenide, a material used in LEDs, sandwiched between two reflectors.

“The vortices have previously only appeared randomly, and always in pairs that swirl in opposite directions,” said Dr Robert Dall, who led the experimental part of the project.

“However, by using a spiral mask to structure our laser, we create a chiral system that prefers one flow direction. Therefore we can create a single, stable vortex at will.”

These vortices are an example of quantum fluid behaviour in which the polaritons coalesce into a rare state of matter known as a Bose-Einstein condensate.

“As well as being a window into the quantum world, these polaritonic vortices could be used to construct extremely sensitive detectors of electromagnetic fields, similar to SQUIDS (Superconducting QUantum Interference Devices),” Dr Ostrovskaya said.

“They could also be employed as quantum information carriers.”

The ANU team has pioneered the study of microcavity polaritons in Australia and hope their success will inspire other research groups around the country.

“Polaritonics is a rapidly developing research field all around the world. We hope we can build a network of groups researching these devices across Australia and joining the international effort,” Dr Ostrovskaya said.

The study is published in Physical Review Letters and featured on physics.aps.org.