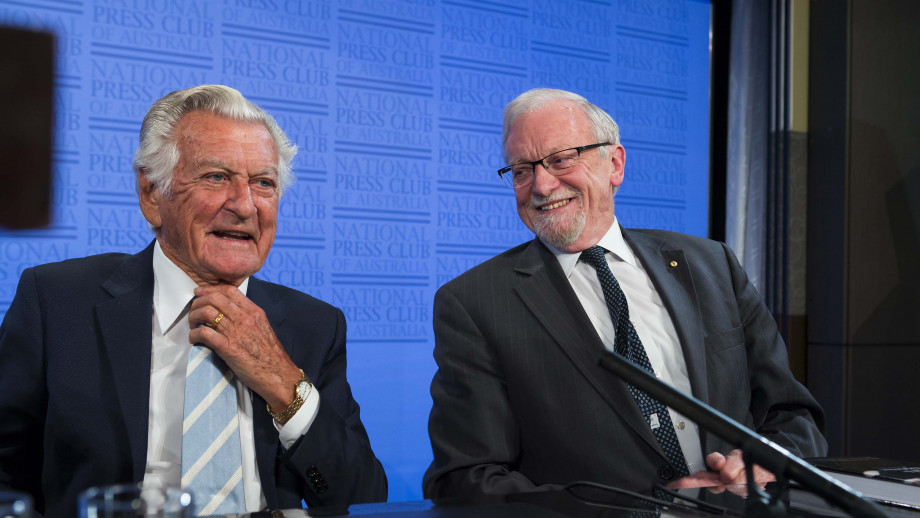 The Australian National University (ANU), which has many ties to Bob Hawke's life and time inside and outside politics, today joins the nation in mourning the passing of Australia's longest-serving Labor Prime Minister.

Mr Hawke's numerous reforms in the federal sphere are being recalled by ANU academics with expertise in national affairs, including some who worked directly with him.

ANU Chancellor, the Honourable Gareth Evans AC QC, was a Cabinet minister throughout the Hawke-Keating era.

Professor Evans said then: "There were plenty of things on which Hawkey and I disagreed - not least when I was Attorney-General.

"Bob had all the attributes of intellect, character and temperament that I identify in the book as necessary for any successful political leader - including that most distinctive characteristic of all - a degree of self-belief that defies normal human inhibition!"

Mr Hawke began study for a PhD at ANU but, before completing the doctorate, he moved to Melbourne to take up a position as research officer with the ACTU.

However, the most memorable story about his time as the first PhD student in law at ANU was when he - apparently - stripped naked during a drunken revel and swam the length of the pool at University House.

The incident has assumed mythical proportions, with some debating whether it really happened.

Dr Jill Waterhouse, author of University House, As They Experienced It: A History 1954-2004, confirms the incident.

"Bob Hawke's escapade in February 1957 is one of the best-known stories about The Australian National University. He was one of five who, in very high spirits, swam about in the ornamental goldfish pool at University House.

"They also stormed up and down the staircases, disturbing a Conference of Bishops. Banned from University House, and asked to leave the University Council, Hawke never completed his ANU degree."

According to Dr Waterhouse Hawke later wrote an apologetic letter to the university authorities assuring them that "the stupidity of the event has impressed itself on me and [you] need not fear that disciplinary action will again be required".

The incident was recalled in ANU Reporter three years ago.

Professor John Hewson reflects on his earliest memories of Bob Hawke, and his inadvertent role in his political "downfall".

"Bob was the highly intelligent larrikin who made Prime Minister. He brought our country out of the recession of the early 80s united by his Accord, and then led a genuine reform agenda through to the early 90s.

"He redefined Labor, and to some extent our nation. He was certainly the best Labor leader since WWII, and arguably our best Prime Minister since then. He understood people and had a fine sense of our national interest.

"He was a Great Australian."

Associate Professor Frank Bongiorno writes in The Conversation: "Hawke was peculiarly popular at a time when unions were not, perhaps partly on account of his reputation for having the magic touch in the resolution of industrial conflict.

"His arched eyebrows and dark wavy hair gave him a striking, handsome appearance seemingly made for television. His educated yet unmistakably Australian speech resonated with the era's more assertive national identity."

"Bob Hawke is a transformational figure in the Australian story and a very important prime minister.