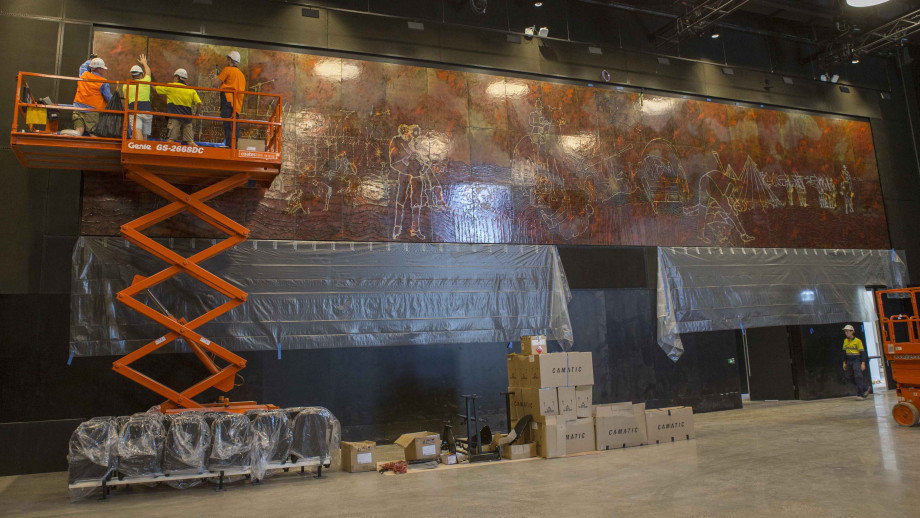 Recognised as one of Nolan's largest and most ambitious works, The Eureka Stockade was donated to the University by the Reserve Bank of Australia (RBA) and is now hanging in the Kambri Cultural Centre.

"The new setting will renew the life and meaning of this remarkable mural," ANU Vice-Chancellor Professor Brian Schmidt AC said.

"This is a monumental gift to the University in both scale and significance, and is one that will surely intrigue and inspire our students, staff and visitors, and enrich the cultural fabric of our campus for generations to come."

The artwork was completed in 1966, after being commissioned to adorn the foyer of the RBA's head office in Melbourne.

It's made up of 66 copperplate panels depicting the Battle of the Eureka Stockade, which took place on the Ballarat goldfields in December 1854.

Nolan managed to preserve the original colour of the copperplates by washing them with nitric acid - an unconventional technique which saw him call on the expertise of leading London enamellers.

"In order to move it they had to make extensive investigations into how it was attached to the wall at the RBA," Director of the ANU Drill Hall Gallery Terence Maloon said.

"After rigorous analysis, they realised they couldn't duplicate that hanging system for the ANU, so we had to use a different approach. It wasn't the simplest process, we we're so happy with the outcome."

This move brings together two major artworks by Nolan, with his mural Riverbend also part of the University's art collection.