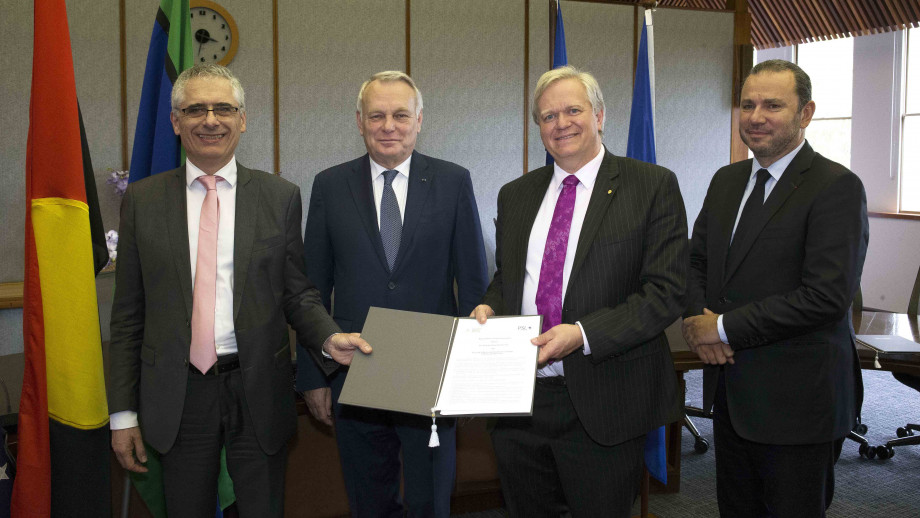 Two of the world's leading research universities, The Australian National University (ANU) and Paris Sciences & Letters (PSL) Research University, have signed a Memorandum of Strategic Engagement in the presence of France's Minister of Foreign Affairs and International Development, Jean-Marc Ayrault.

ANU Vice-Chancellor Professor Brian Schmidt said universities were at the heart of stronger international collaboration in science and technology and humanities research, and in building closer links with industry partners.

"Higher education and research are at the heart of the new strategic partnership, and the agreement between ANU and PSL illustrates the role that leading universities have to play in an increasingly globalised world," Professor Schmidt said.

"ANU and PSL are already working on a range of collaborations in law and society, and with scientists working on high technology instruments to help with space exploration.

"The common action plan is further strengthened by our growing ties with industry, such as our collaborations with Airbus on the use of satellite imagery and instrument technology."

During a three-day visit to ANU, researchers from the two institutions, including the Paris Observatory, one of the largest astronomical centres in the world, held a summit meeting on astronomy and astrophysics.

Claude Catala, President of the Paris Observatory, and Matthew Colless, Director of the ANU Research School of Astronomy and Astrophysics (RSAA), were joined by researchers from PSL and ANU to discuss exoplanets and the origin of life, galactic archeology, and high angular resolution.

Thierry Coulhon, President of PSL and formerly director of the Mathematical Sciences Institute at ANU from 2012 to 2014, said the new engagement agreement would foster dynamic exchanges and collaborative research.

"This engagement signed by a French IDEX university in Australia underlines the opportunities created by the reshaping of France's higher education and research landscape for international collaboration," he said.

"Such collaboration is essential to compete on a global scale, when size matters to achieve your goals. Our partnership with ANU typifies the high-level dialogue between two leading universities to foster dynamic exchange and innovative research."

PSL will also sign a letter of intention with The French Embassy in Australia to further reinforce university and scientific cooperation, and support the mobility of students between France and Australia.

French Ambassador to Australia, His Excellency Mr Christophe Lecourtier, said the French Embassy in Australia was working to build exchanges and partnerships between Australia and PSL.

"With leading research universities such as PSL the French Embassy in Australia is developing a comprehensive financial aid program to facilitate French-Australian cooperation through education-research and innovation," he said.

"The French Embassy in Australia, in partnership with PSL, will support the mobility of Australian undergraduate and postgraduate students to France, through laboratory and company research internships."