» Newsroom » All news » Bugs resort to several colours to protect themselves

Bugs resort to several colours to protect themselves 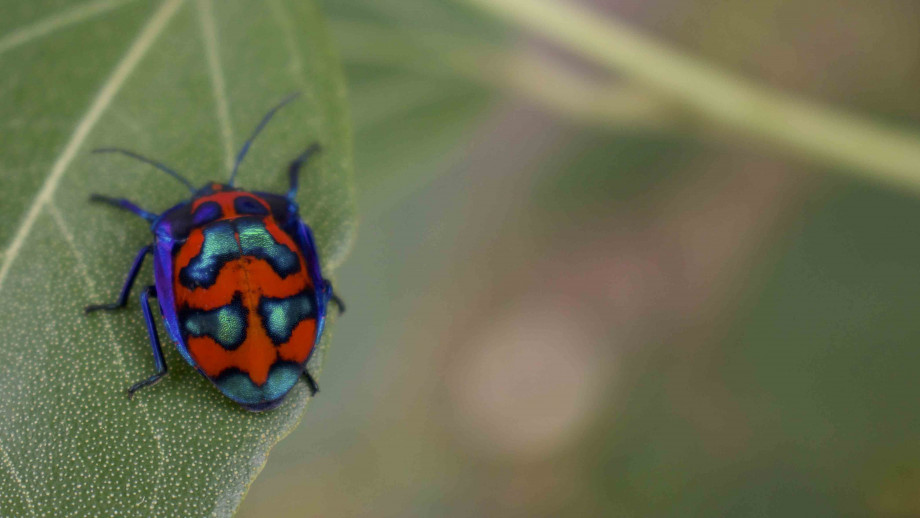 New research has revealed for the first time that shield bugs use a variety of colours throughout their lives to avoid predators.

Shield bugs are often bright, colourful insects that use colours to warn of their distastefulness to predators. The paper, published in The Royal Society, found that it is impossible to predict how an adult bug will look based on their colour when young.

Co-author Dr Megan Head from The Australian National University (ANU) says while many adult animals look like larger versions of their younger selves, with insects that's often not the case.

"With insects in particular it's common for the young to look completely different from the adults," she said.

"Just think of caterpillars - some of the most beautiful caterpillars turn into the dullest moths or butterflies, and vice versa. We were interested in understanding what influences whether young and adults within a species share the same colour patterns."

The researchers found that in most species, the same individual bug will use different colour combinations as nymphs - young bugs - and adults, for example going from red and green to yellow and green.

"This is significant because many of these species use colour to warn predators that they are distasteful, and for years it has been thought that animals living in the same environment - like nymphs and adults of the same species - should use similar warning colours, not different ones," said lead author Dr Iliana Medina, from the University of Melbourne.

The study combined information on colour in young and adults for more than 100 species of shield bugs worldwide. They then used field work in Canberra, with white-winged choughs, to measure how likely these birds were to attack adult and nymphs of one Australian species of shield bug, the cotton harlequin bug.

Experiments were also conducted in the aviary, training two-week-old chicks to see how fast they learned to avoid nymphs and adults, then testing whether their previous experience with adults could reduce attack rates on nymphs.

"Our experiments with the cotton harlequin bug showed that predators could quickly learn to avoid both types of colour signals from nymphs and adults, but nymphs get a larger benefit," Dr Medina said.

"Although young and adult cotton harlequin bugs have different colours, previous experience with adults make chicks less likely to attack the nymphs. Also, chicks and wild predators that have never seen the insects before do not show much interest in eating them. The colours in these insects are a great strategy against predators."

Many animals such as frogs, insects and sea slugs use bright colourations to advertise toxicity or distastefulness. In theory, warning signals of prey that live in the same environment should be the same because predators can learn more effectively to avoid one type of pattern, instead of many different ones.

While this idea has been used to explain the great examples of mimicry in nature, and why distantly related species end up having the same warning colours, such as black and red, or black and yellow, researchers say there are multiple examples of variation in local warning signals and an overlooked type of variation is that across life stages.

"Our study suggests that variation in the warning colouration of shield bugs result from flexible learning in predators," Dr Head said.

"If predators were limited in their ability to generalise what they learn, then we would expect nymphs and adults of the same species to look the same."