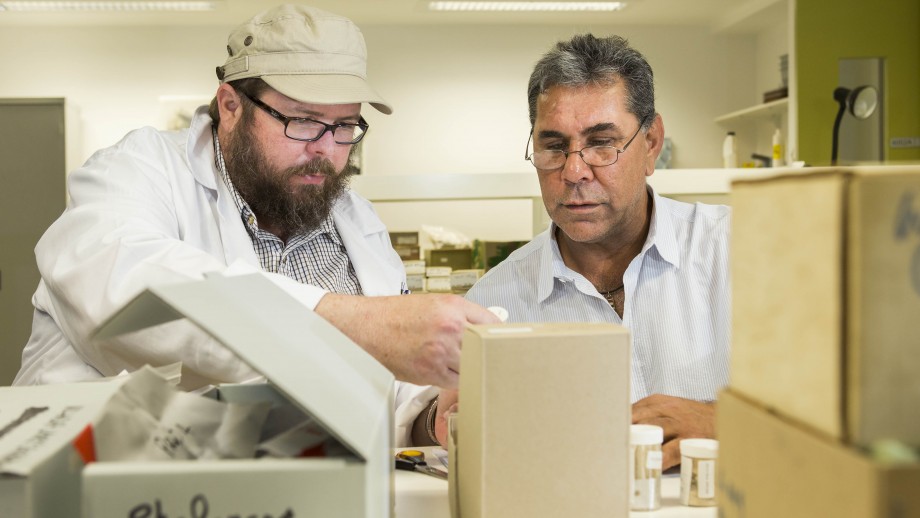 We are so grateful he is going to be coming home. He's done his job. It is time for him to go home and rest now.

Historic Ancestral Remains discovered at Lake Mungo in the 1960s and early 1970s have been returned to elders from the Willandra Lakes area of Western New South Wales in the first step of their journey home.

The remains, including those known as Mungo Man, were handed to elders of the Mutthi Mutthi, Ngiyampaa and Paakantji/Barkandji people during a formal ceremony at The Australian National University (ANU).

"ANU has been custodian of the remains for four decades, and has treated them with great care and respect. It is now time for them to be returned to the care of their Indigenous descendants," said ANU Vice-Chancellor Professor Ian Young AO.

"ANU was happy to receive the request from the traditional custodians of the Willandra Lakes region to hand back the historic ancestral remains and we are pleased to see the remains start their journey back to country."

At the request of the Willandra Lakes communities, the remains were transferred to the National Museum of Australia's (NMA) repatriation unit ahead of their anticipated return to Lake Mungo.

The oldest human remains discovered in Australia and dating back 40,000 years, the remains have been the subject of extensive research and helped rewrite the anthropological history of Australia.

They were the basis for extensive research which contributed to a deeper understanding of Indigenous Australians and the importance of the Willandra Lakes region as an area of priceless national and cultural heritage.

The Ancestral Remains of a woman and child from Willandra Lakes, known as Mungo Lady and dating back around 20,000 years, were returned to a temporary keeping place at Lake Mungo in 1991.

In late 2014, the Willandra Repatriation Traditional Custodians, through the New South Wales Office of Environment and Heritage (OEH), formally requested the repatriation of the remains. Archaeologists and researchers from universities across Australia endorsed the request in February this year.

Over the past week, anthropologists and elders have overseen the careful removal of the remains from a secure location at ANU and the formal handing over of the remains to the elders and new custodians at the NMA.

Mutthi Mutthi elder Aunty Mary Pappin said she hoped Mungo Man would soon return to country, and that Aborigines from all over Australia would celebrate the return.

"It's been a long time coming for our people," she said. "We are so grateful he is going to be coming home.  He's done his job. It is time for him to go home and rest now."

"They've treated him very well, but I think they've learned enough now," she said. "Now it's time to take him home to rest. All of Aboriginal Australia will be very proud to know this has happened."

"It means quite a lot to us, because it should never have happened that he was taken away without our permission. It is really great that he will be coming back."

As part of the return, ANU acknowledged the removal of the remains has been a source of distress for the elders and local community members, and that past research was not always done with the full knowledge and support of the traditional owners of the Willandra Lakes area.

On behalf of the University, Professor Young made a formal statement of apology to the Mutthi Mutthi, Ngiyampaa and Paakantji/Barkandji people.

"We recognise that the removal of these ancestral remains caused ongoing grief to your communities and we apologise unreservedly for this," Professor Young said.

"We hope that the return of these Ancestors to you, the traditional owners, can in some way redress our past mistakes, and the mistreatment and distress that we have caused you. We sincerely hope that this will be the beginning of a healing process for your communities."

A spokesperson for the NMA said the Museum would temporarily hold the Willandra Lakes remains at the request of the Mutthi Mutthi, Ngiyampaa and Paakantji/Barkandji people.

"We appreciate the trust the communities have placed in the National Museum in asking it to undertake this task," the spokesperson said.

OEH Chief Executive Terry Bailey said his office would continue to work with the Traditional Owners.

"It is so pleasing to see the journey to return these remains has begun," he said. "We will continue to work with the Willandra Repatriation Traditional Custodians to bring the journey to its final conclusion."