Recognising Rachael for her research on Indigenous health 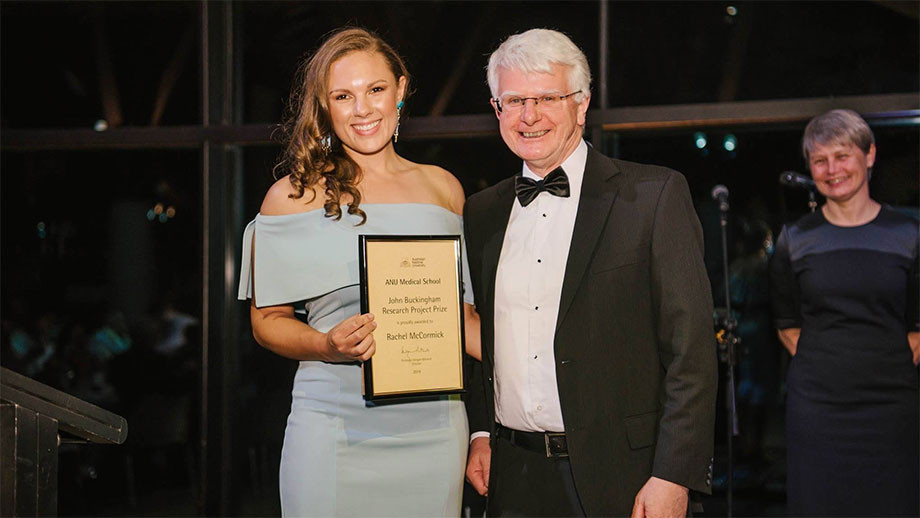 From the beginning, my supervisor and I decided that we would focus on something positive, given that the majority of even the most well-meaning research involving Indigenous participants tends to have a negative slant in some way.

Dr John Buckingham, a well-respected Canberra surgeon, was known across the country for his work in breast cancer surgery and diagnosis. In 2011, his friends and family established the John Buckingham Research Project Prize to honour him.

Before moving to Canberra to study at ANU, Rachael studied public health in New Zealand, where she became passionate about the social determinants of health, inequities faced by different populations, and what could be done to rectify this.

"Naturally, Maori health was a large part of this and when I moved to Australia, I began to learn a lot about Aboriginal and Torres Strait Islander peoples' history, and how there has been a devastating impact on health outcomes, post-colonisation," said Rachael.

As part of her medical degree, Rachael had to complete a research project.  She decided that her background and interests aligned with a qualitative project in Indigenous health.  Rachael and her team analysed hundreds of interviews from Australia's largest longitudinal study of Indigenous children.

"From the beginning, my supervisor and I decided that we would focus on something positive, given that the majority of even the most well-meaning research involving Indigenous participants tends to have a negative slant in some way."

Rachael found that parents were motivated to create positive change for their communities and future generations. The participants were also willing to provide valuable data to influence research and policy. This allowed them to tell their own stories from their unique perspectives. She believes that many Indigenous caregivers are willing to work in collaboration with government and researchers, despite the historical tensions.

She has now moved to Bega to complete a rural internship, and hopes that after the devastating fires, she can make a positive contribution to the community.  Rachael feels incredibly grateful for the wonderful opportunities that the John Buckingham Research Project Prize has brought her. She aspires to do more qualitative research with Indigenous and rural communities.