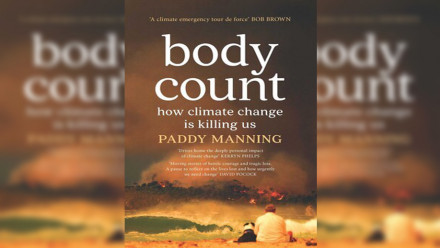 Paddy Manning will be in conversation with Helen Haines on Paddy's new book Body Count. How Climate Change is Killing Us.

Suddenly, when the country caught fire, people realised what the government has not: that climate change is killing us. But climate deaths didn't start in 2019. Medical officers have been warning of a health emergency as temperatures rise for years, and for at least a decade Australians have been dying from the plagues of climate change - from heat, flood, disease, smoke. And now, pandemic.

In this detailed, considered, compassionate book, Paddy Manning paints us the big picture. He revisits some headline events which might have faded in our memory - the Brisbane Floods of 2011; Melbourne's thunderstorm asthma fatalities of 2016 - and brings to our attention less well-publicised killers: the soil-borne diseases that amplify after a flood; the fact that heat itself has killed more people than all other catastrophes put together. In each case, he has interviewed scientists to explore the link to climate change and asks how - indeed, whether - we can better prepare ourselves in the future.

Most importantly, Manning has spoken to survivors and the families of victims, creating a monument to those we have already lost. Paddy Manning tells these stories of tragedy and loss, heroism and resilience, in a book that is both monument and warning.

Paddy Manning is contributing editor (politics) for The Monthly magazine and author of four books including Inside the Greens, Born to Rule: The Unauthorised Biography of Malcolm Turnbull. Over a 20-year career in journalism he has worked for the ABC, Crikey, SMH/The Age, AFR, The Australian and was founding editor and publisher of Ethical Investor magazine.

Dr Helen Haines MP was elected to the House of Representatives for Indi, Victoria in May 2019. She was one of seven independent candidates in the election to sign a joint agreement to cooperate on climate action in the new parliament. Haines has a bachelor's degree from Deakin University, a master's degree in epidemiology and public health from the University of New South Wales and a doctorate in medical sciences from Uppsala University.

"Body Count is a brilliant exposition of why we must deal with the climate problem now" - Ross Garnaut.

Signed copies of Paddy's book will be available for sale at Harry Hartog bookshop, ANU.

If you would like to submit a question to be answered in conversation, please email events@anu.edu.au with your question for Paddy.