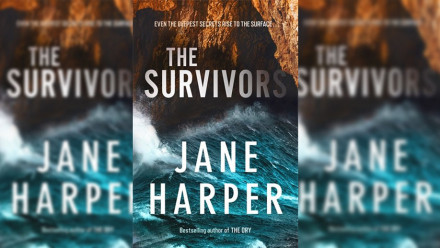 Jane Harper and Anna Creer will be will be in conversation on Jane's compelling new stand-alone novel The Survivors, set on the Tasmanian coast.

Kieran Elliott's life changed forever on the day a reckless mistake led to devastating consequences. The guilt that still haunts him resurfaces during a visit with his young family to the small coastal community he once called home. Kieran's parents are struggling in a town where fortunes are forged by the sea. Between them all is his absent brother, Finn. When a body is discovered on the beach, long-held secrets threaten to emerge. A sunken wreck, a missing girl, and questions that have never washed away...

Jane Harper has said "I've really enjoyed writing this one. It's been a lot of fun researching and writing about such a fantastic part of the country. I loved bringing together the characters and twists and turns, so I hope you enjoy it"

Jane Harper is the author of the international bestsellers The Dry, Force of Nature and The Lost Man. The Dry, which has sold over a million copies worldwide, has now been made into a major motion picture starring Eric Bana , due for release in April 2021. Jane has won numerous top awards including the Australian Book Industry Awards Book of the Year, the Australian Indie Awards Book of the Year, the CWA Gold Dagger Award for Best Crime Novel, and the British Book Awards Crime and Thriller Book of the Year. Jane worked as a print journalist for thirteen years both in Australia and the UK, and now lives in Melbourne with her husband and two children.

Anna Creer is the regular crime fiction reviewer for the Canberra Times and former Head of the English Department at Canberra Boys Grammar.

Copies of Jane's book will be available for sale at Harry Hartog bookshop, ANU.

If you would like to submit a question for Jane to be answered in conversation, please include this when registering or alternatively, email your question to events@anu.edu.au.

A link to access the event will be emailed upon registration.