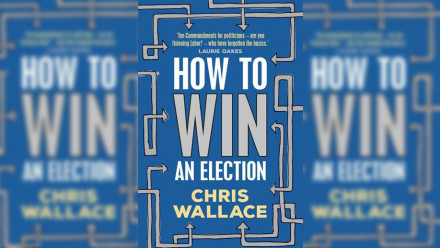 Chris Wallace will be in conversation with Mark Kenny on Chris's new book How To Win An Election, which spells out the ten things a political leader and their party must excel at to maximise the chance of success, and against which they should be accountable between and during elections.

The 2019 Australian election produced a surprise result showing, not for the first time, that every election is there for the winning - including the next one. Labor's surprise loss in 2019, like the Liberal and National parties' defeat in the so-called 'unloseable' 1993 election, showed how careful attention to basic political craft can yield big dividends - and how inattention to it can turn apparently certain favourites into losers. With the vast challenges of climate change and social and economic equity in the post-pandemic world ahead of us, Australia cannot afford any more costly election accidents.

Better performance in even a few of the areas canvassed in this book can change an election outcome, so full attention should be paid to each of them, all the time, every time, without fail, Wallace argues - in real time when it counts. How To Win An Election is a crucial insurance policy against overconfident leaders imposing learner errors on their supporters over and over again, and for getting the best results from Australia's democratic system.

'Scott Morrison believes in miracles, but this book suggests 10 commonsense rules could do the job for Labor.' - Laurie Oakes

Dr Chris Wallace is Associate Professor, 50/50 By 2030 Foundation, University of Canberra and a Visiting Fellow in the School of History, ANU. She is the author of several books, including biographies of Germaine Greer and John Hewson. Chris's ANU doctoral thesis on political biography as political intervention is currently in preparation as a book titled 'The Silken Cord: Australia's Twentieth Century Prime Ministers & Their Biographers'.

A first career as an economic and political journalist in the Canberra Press Gallery has contributed to Chris Wallace's success in public-facing scholarly communications, including through The Conversation which has twice named her one of Australia's 'Top Thinkers' (2017 and 2019)

Mark Kenny is Professor at the Australian Studies Institute at ANU, an appointment following a high-profile journalistic career culminating in six years as chief political correspondent and national affairs editor of The Sydney Morning Herald, The Age, and The Canberra Times. He is a regular on the ABC's Insiders program, Sky News Agenda, and radio programs across the country.

Signed copies of Chris's book will be available for sale at Harry Hartog bookshop, ANU.

If you would like to submit a question to be answered in conversation, please email events@anu.edu.au with your question for Chris.