» Events » Samantha Power on The Future of Democracy

Samantha Power on The Future of Democracy 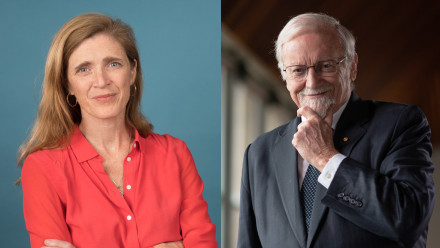 Ambassador Samantha Power is the Anna Lindh Professor of the Practice of Global Leadership and Public Policy at Harvard Kennedy School and the William D. Zabel Professor of Practice in Human Rights at Harvard Law School.

From 2013 to 2017 she served as the 28th U.S. Permanent Representative to the United Nations, as well as a member of President Obama's cabinet. In this role, she became the public face of U.S. opposition to Russian aggression in Ukraine and Syria, negotiated the toughest sanctions in a generation against North Korea, lobbied to secure the release of political prisoners, helped build new international law to cripple ISIL's financial networks,
and supported President Obama's path-breaking actions to end the Ebola crisis.

From 2009 to 2013, she served on the National Security Council as Special Assistant to the President and Senior Director for Multilateral Affairs and Human Rights.

Before joining the U.S. Government, Ambassador Power was the founding executive director of the Carr Center for Human Rights Policy at the Kennedy School. She earned a B.A. from Yale University and a J.D. from Harvard Law School, and began her career as a journalist, reporting from places such as Bosnia, East Timor, Kosovo, Rwanda, Sudan, and Zimbabwe and she has twice been named in the Time Magazine's "100 Most Influential People" list.

Ambassador Power's book, "A Problem from Hell": America and the Age of Genocide won the Pulitzer Prize, the National Book Critics Circle Award, and many other awards. Her most recent book, about which she will be talking at ANU and in Sydney and Melbourne, The Education of an Idealist, was published by Harper Collins in September 2019, and is currently on The New York Times Best Sellers list with multiple high-level endorsments:

'Samantha Power is a Pulitzer winner, an incredible writer, and a great friend. Her memoir grapples with the balance between idealism, pragmatism, advocacy, and governance.' - Barack Obama

'This is a wonderful book...The interweaving of Power's personal story, family story, diplomatic history and moral arguments is executed seamlessly - and with unblinking honesty.' - Thomas Friedman, The New York Times.