» Events » In conversation with Sue and Saroo Brierley

In conversation with Sue and Saroo Brierley 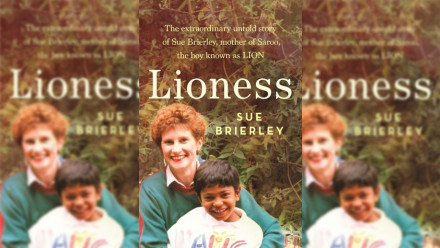 Sue and Saroo Brierley in conversation with Alex Sloan on Lioness. The extraordinary untold story of Sue Brierley, mother of Saroo, the boy known as LION.

A powerful and moving account of adopting the boy who inspired the motion picture LION. Saroo Brierley's journey home to a small village in India with the help of Google Earth became an internationally bestselling book and inspired the major motion picture LION. But the story of how his adoptive mother, Sue, came into his life half a world away in Tasmania is every bit as riveting.

In this uplifting and deeply personal book Sue reveals for the first time her own traumatic childhood. The daughter of a violent alcoholic whose business gambles left her family destitute, she grew up in geographic and emotional isolation. When Sue married and broke free of her father she was determined to also sever the cycle of despair, and made the selfless decision not to have a biological child. Instead, inspired by a vision she'd had as a young girl, she chose to adopt two children in need - Saroo and Mantosh. Little did she imagine that twenty-five years later she would be portrayed on screen by another Australian mother who chose to adopt - Nicole Kidman.

Moving and inspiring, Lioness explores the myth of motherhood, how families are formed in many ways, and how love and perseverance can bring us together.

Alex Sloan AM, the 2017 Canberra Citizen of the Year, is a regular conversationalist for ANU Meet the Author events.

Sue will sign copies of her new book after the talk, as will Saroo with his new picture book, Little Lion, illustrated by Bruce Whatley. Both Available for purchase from the Harry Hartog Bookshop stand,

The conversation will be followed by a screening of Lion, starring Nicole Kidman and Dev Patel, the story of Saroo Brierley's search for his childhood home.

This event requires pre-booking in order for NSFA to adhere to social distancing capacity restriction.