» Events » In Conversation with Marilyn Lake

In Conversation with Marilyn Lake 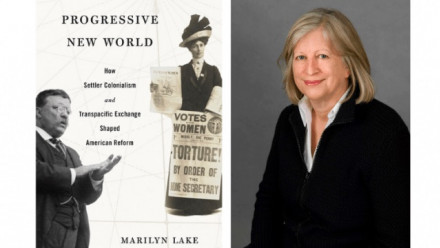 The paradox of progressivism continues to fascinate more than one hundred years on. Democratic but elitist, emancipatory but coercive, advanced and assimilationist, Progressivism was defined by its contradictions. In a bold new argument, Marilyn Lake points to the significance of turn-of-the-twentieth-century exchanges between American and Australasian reformers who shared racial sensibilities, along with a commitment to forging an ideal social order. Progressive New Worlddemonstrates that race and reform were mutually supportive as Progressivism became the political logic of settler colonialism.

Professor Lake has published widely on the histories of citizenship, nation, empire, and war. She has published on the history of campaigns for sexual and racial equality for academic presses as well as local newspapers. Recent books include the prize-winning 'Drawing the Global Colour Line: White Men's Countries and the International Challenge of Racial Equality' (Cambridge, 2008) co-authored with Henry Reynolds and 'Progressive New World: How Settler Colonialism and TransPacific Exchange Shaped American Reform' published this year by Harvard University Press.

Professor Lake served as President of the Australian Historical Association between 2010 and 2014. She is a Fellow of the Academies of Humanities and Social Sciences.

Professor Frank Bongiorno is Head of the ANU School of History. He is the author of the award-winning a The Sex Lives of Australians: A History and The Eighties: The Decade That Transformed Australia. He has reviewed for the Times Literary Supplement, Australian Book Review, the Monthly, Fairfax and The Australian. He is a regular contributor to Inside Story and The Conversation. Frank is a Carlton supporter.

Book signings will take place immediately following the event in the Lotus Hall outside of the auditorium. This event is in association with Harry Hartog Bookshop and books will be available for purchase.