» Events » In Conversation with David Nicholls

In Conversation with David Nicholls 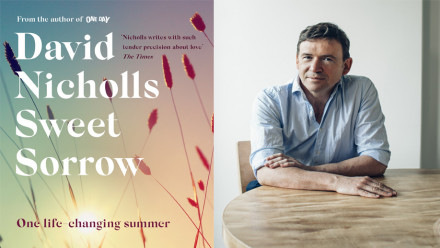 British author, David Nicholls will be in conversation with Alex Sloan on David's new novel Sweet Sorrow. It is 10 years since David Nicholls' One Day elevated him from "ordinary" bestseller status. The film, starring Anna Hathaway, catapulted Nicholls into fiction's premier league with book sales of 1.7 million copies.

Nicholls's talent lies in heart-rending and witty explorations of fairly ordinary subjects: student life in Starter for Ten (2003), career doldrums in The Understudy (2005), a midlife marital crisis in the Man Booker-longlisted Us (2014), which is now to be made into a BBC TV series with Tom Hollander. Novel sales for David Nicholls now total over 8 million copies.

David Nicholls is also an award-winning screenwriter, writing the screenplays for Great Expectations and Far from the Madding Crowd (starring Carey Mulligan). He won a BAFTA and an Emmy nomination for his adaptation of Patrick Melrose from the novels by Edward St Aubyn.

Sweet Sorrow, which has received rave reviews on British publication, is narrated by Charlie Lewis, looking back at his 16-year-old self and his meeting with Fran Fisher, who is part of a theatre troupe putting on Romeo and Juliet. The price of hope, it seems, is through Shakespeare.

Poignant, funny, enchanting, devastating, Sweet Sorrow is a tragicomedy about the rocky path to adulthood and the confusion of family life, a celebration of the reviving power of friendship and that brief, searing explosion of first love that can only be looked at directly after it has burned out.

'Such a beautiful book. Captures perfectly a moment in time we've all experienced.' - Graham Norton

Alex Sloan AM, one of Canberra's best loved personalities, former ABC journalist and 2017 Canberra Citizen of the year, is a regular conversationalist for ANU Meet the Author events.

The vote of thanks will be given by Sally Pryor, Features Editor of the Canberra Times.

Book signings at before and after the event by Harry Hartog Bookshop.

188Australian Centre on China in the World