Eat, Drink and be Literary with Gareth Evans & Laura Tingle 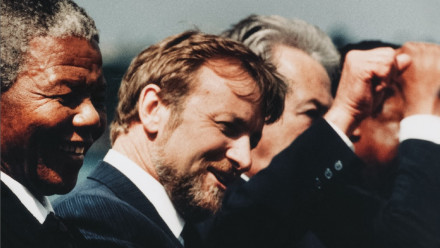 THIS EVENT IS SOLD OUT.

Professor Gareth Evans will join Laura Tingle in conversation to discuss his new book, Incorrigible Optimist: A Political Memoir, in which he looks back over the highs and lows of his public life as a student activist, civil libertarian, law reformer, industry minister, international policymaker, educator and politician. He explains why it is that, despite multiple disappointments, he continues to believe that a safer, saner and more decent world is achievable, and why, for all its frustrations, politics remains an indispensable profession not only for megalomaniacs but idealists.

Gareth Evans, a colourful and central figure in Australian politics for two decades, has been described by Bob Hawke as having "the most acute mind" of any of his ministers and has been recognised a worldwide for his contributions, both as Foreign Minister and in later international roles, to conflict resolution, genocide prevention and curbing weapons of mass destruction. In this sometimes moving, often entertaining, and always lucid memoir, Gareth Evans focuses on what he describes as "the biggest policy themes pursued during the course of a long public life, recalling some of the characters and incidents, and pain and pressure and exhilaration, experienced along the way".

"Gareth Evans's career serves as an inspiration on how a spirit of optimism coupled with a keen insight for the art of the possible can create real positive change. In this lively memoir, he takes us through some of the most important developments in Australian and international politics. The man that emerges is truly one of Australia's leading figures and one of the world's great internationalists." KOFI ANNAN

Professor the Hon. Gareth Evans, now Chancellor of The Australian National University, was a member of the Australian Parliament for 21 years, and a cabinet minister throughout the Hawke-Keating era. From 1988 to 1996 he served as Foreign Minister. He led the Brussels-based International Crisis Group from 2000 to 2009 and has won many prizes and awards for his contributions to international policymaking. He has written or edited, solely or jointly, twelve other books, including Australia's Constitution: Time for Change (1983), Australia's Foreign Relations (1995), The Responsibility to Protect (2008) and Inside the Hawke-Keating Government: A Cabinet Diary (2014).

Laura Tingle is the Political Editor of The Australian Financial Review. Laura has over 30 years' experience as a reporter covering markets, economics and politics. Laura has won two Walkley awards and the Paul Lyneham award for Excellence in Press Gallery Journalism. Laura's In Search of Good Government: Great Expectations & Political Amensia brings together her two recent best-selling Quarterly Essays with a major update on Turnbull in power.

Pre-dinner book signings and a cash bar will be available from 6.15pm in the Common Room of University House. Book signings will also take place after the dinner.

Dinner starts at 7pm. Tickets are $70 per person and includes a two-course meal, a glass of House wine, tea and coffee.

If you would like to be seated with other guests, please specify this during the check-out process. We will do our best to accommodate your request.