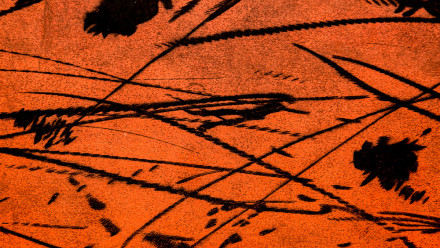 This event brings together artists and scholars from around Australia and overseas, established and early career, working in innovative ways on the cusp between law and visual studies. It will showcase explorations how aesthetics engages with ideas of law and justice in the modern world, including the work of two visitors to the centre, legal scholar Eliza Garnsey (Cambridge) and artist and writer Lola Frost (King's College London).

Dr Rachel Joy is a Melbourne based visual artist and academic. Her paintings, print works, sculptural practice and writings comment on local and global issues regarding place, identity and history. Trained as an historian before turning to art, Rachel's artworks often reference hidden historical events and offer new ways of understanding them. Rachel has won public art commissions and international residencies and has collaborated with companies of significant renown including Opera Victoria and Snuff Puppets Theatre Company. She is published in books and academic journals and her work has been exhibited at a range of galleries and public spaces internationally and throughout Australia.

Lola Frost, originally from South Africa, currently lives in the UK. Work from her art exhibitions between 1983 and 1996 can be found in major public collections in South Africa. Solo exhibitions in the UK include, Coming Alive, 2013 (Clerkenwell Gallery), Taking Risks, 2014 (Somerset House); Going South, 2015 (Somerset House) and Living the Fold, 2017 (University of Brighton); Towards Deep and Radiant Time, 2018 (Bush House King's College London).

Her academic career includes a senior lectureship in Art history and Art Theory in the Visual Art Dept DUT, South Africa; PhD from Goldsmiths College, Visual Art Dept in 2007; part time teaching at the Working Men's College in London from 2008 to 2011. She has published articles on politics, ethics and aesthetics; and explored the topic of aesthetic risk during her Leverhulme artist's residency in the Department of War Studies KCL in 2014/15, where she is currently a Visiting Research Fellow.

Eliza Garnsey is a British Academy Postdoctoral Fellow in International Relations at the University of Cambridge and a Visiting Fellow at the Centre for Law, Arts and the Humanities, ANU. Her research focuses on art and visual culture in international relations and world politics, particularly in relation to human rights, transitional justice, and conflict. Eliza's book, entitled The Justice of Visual Art: Creative State-Building in Times of Political Transition, is forthcoming with the Law in Context series at Cambridge University Press. The book demonstrates that there are aesthetic and creative ways to pursue transitional justice-ways which have the capacity to address identity divisions and exclusions in nations emerging from conflict.

Maya Borom is a PhD candidate in Monash University's School of Media, Film and Journalism. Her doctoral research focuses on incursions of international law and human rights in cinematic representations of terrorism. She is currently a Lecturer with a focus on teaching criminology, law and screen studies at various Universities and includes some of her degrees as a Bachelor of Arts (hons), a Bachelor of Laws and a Master of Public and International Law with a specialisation in international criminal law.

Laura Petersen's cross-disciplinary research interests combine approaches to jurisprudence with German studies, art and literature. She is a PhD Candidate at the Centre for International Law and Humanities at the Melbourne Law School. Nearing completion, her thesis focuses on the practices of restitution undertaken by jurists, authors and artists in Germany post-WWII. Laura was recently awarded a German research grant to work on her new project on Gerhard Richter and the Reichstag in the faculties of Law and Art History at LMU Munich in 2020.