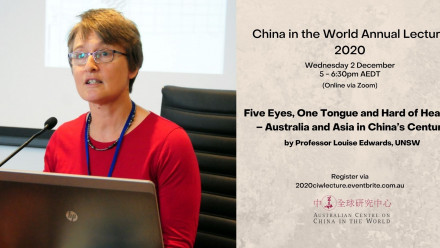 Australian Centre on China in the World (CIW) presents the 2020 CIW Annual Lecture (online) 'Five Eyes, One Tongue and Hard of Hearing – Australia and Asia in China’s Century' by Professor Louise Edwards, UNSW.

Australia’s relationships with the various nations of Asia are complex—the current trade and diplomatic crisis with China shows us the speed at which gains made over years can unravel in a matter of months. This crisis emerged despite more than 30 years of initiatives designed to improve Australia’s knowledge of Asia and reorient our thinking. To many Australians, including our leaders in government, media, education, business, arts and industry, Asia is 'over there’—variously an exotic holiday, a big market, a diversionary foil, a threatening flood of illegals or slick, sneaky, cashed-up communists. Australians often struggle to really see, speak or listen to Asia. But, Asia is already here, in Australia. Asian Australians and Asia-oriented Australians know this reality. The 2020 China in the World (CIW) Annual lecture asks: How does “Asia” manifest in Australia? How does our current crisis with China reflect deeper problems in Australia’s engagement with Asia and Asian Australians? What does speaking with, and listening to Asia require and what benefits will it bring?

About the speaker:
Louise Edwards is Scientia Professor of Chinese History at UNSW, Sydney and Honorary Professor at Hong Kong University’s China Studies program. She teaches on China and Asia-Australia relations. Her most recent sole-authored books include Citizens of Beauty: Drawing Democratic Dreams in Republican China (Washington University Press, 2020), Women Warriors and Wartime Spies of China (Cambridge University Press 2016), and Women Politics and Democracy: Women’s Suffrage in China (Stanford University Press 2008). Edwards is a Fellow of the Australian Academy of Humanities, the Academy of the Social Sciences in Australia and the Hong Kong Academy of the Humanities. Between 2015-2016 she served as President of the Asian Studies Association of Australia and is currently on the Council of the Chinese Studies Association of Australia.

How to join the CIW Annual Lecture online?
Join from a PC, Mac, iOS or Android and we will send you the password after registration on Eventbrite: 2020ciwlecture.eventbrite.com.au

Dial by your location within Australia: