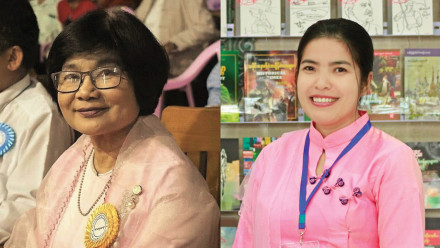 Burmese is the official language of Myanmar, which has a population of 54 million, where around 70% are mother-tongue speakers. Burmese is also the main lingua-franca in the country as well as in Burmese communities worldwide and has a long history of use in literary works and music. Since the 2015 election which brought victory to Aung San Suu Kyi's National League for Democracy, the civilian government is currently struggling amid the complexity of politics combined with the military, but since the abolishment of censorship in August 2012, Burmese publications have been constantly expanding and Burmese language is increasingly used on the internet. Importantly, even during the fifty years of censorship, Myanmar always had many vigorous publishing activities and reading has always been a wide interest among Burmese. Reading novels, short stories etc., is not only for a handful intellectuals but also a major entertainment for mass readers.

Through inviting two famous Burmese writers Ju and Sabal Phyu Nu, this lecture will present many vibrant aspects of Burmese language and culture.

Ju, who is one of the most popular writers in Myanmar since the 1980s and now also widely recognized as an environmental activist, will talk about the Burmese appreciation of beauty of nature as depicted in their literature. She will refer back to Yatu poems written by Buddhist monks hundreds of years ago and explore the interpretation of nature as shown in novels published during the socialist era, then comment on the current serious environmental problems in Myanmar and the idea of ecological citizenship.

Sabal Phyu Nu will discuss trends in Burmese novels over the past six decades and some of the challenges that novelists there currently face. She will talk about the fact that in spite of many novels being published from 1960 to 1980, few outstanding novels were produced after 2000, largely because of the military government's discouragement. She will also comment on the trend that since around 2017 some novelists have begun publishing creative works which are now attracting new readers.

The event is split between English and Burmese sessions, with light refreshments in between the sessions.