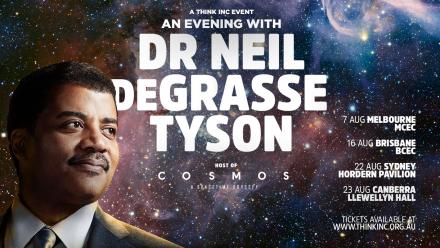 We are delighted to announce we have partnered with Think Inc to bring renowned astrophysicist Neil deGrasse Tyson to ANU as part of National Science Week ACT.

Tickets on sale now via Ticketek.

An evening with Neil DeGrasse Tyson

You might know him as the host of Cosmos: A SpaceTime Odyssey or the new tv-series StarTalk. Maybe as the head of the world-renowned Hayden Planetarium in New York City or the author of ten books including Space Chronicles: Facing the Ultimate Frontier and Death By Black Hole and Other Cosmic Quandaries. He is also the namesake of asteroid "13123 Tyson" and known as the "Sexiest Astrophysicist Alive," but mostly he is world renowned astrophysicist Neil deGrasse Tyson.

Neil deGrasse Tyson is a renowned astrophysicist, cosmologist, author and science communicator. Born and raised in New York City, Tyson went from the Bronx High School of Science to earn his BA in physics from Harvard University and his PhD in astrophysics from Columbia University. Tyson's professional research interests include star formation, exploding stars, dwarf galaxies and the structure of our Milky Way.

Tyson also authored The Pluto Files: The Rise and Fall of America's Favorite Planet which was turned into The Pluto Files documentary and Origins: Fourteen Billion Years of Cosmic Evolution which is the companion book to the 4-part mini-series Origins in which Tyson served as on-camera host.  Tyson served as the Executive Editor and on camera host & narrator for Cosmos: A SpaceTime Odyssey, the 21st century reboot of Carl Sagan's landmark tv-series. The series has been nominated for 13 Emmy Awards, including Outstanding Documentary. Most recently, Tyson will appear on the late night comedic talk show StarTalk, airing in Australia in April 2015.

Tyson is the head of the Hayden Planetarium in New York City and is also the founder and a research associate of the Department of Astrophysics at the American Museum of Natural History. Tyson was appointed by President Bush twice to serve on government commissions, first studying the future of the US aerospace industry then advising on the implementation of the United States Space Exploration Policy. NASA also appointed Tyson to serve on its prestigious Advisory Council.

He is the recipient of eighteen honorary doctorates and the NASA Distinguished Public Service Medal, the highest award given by NASA to a non-government citizen. His contributions to the public appreciation of the cosmos have been recognised by the International Astronomical Union in their official naming of asteroid "13123 Tyson". In 2000 he was voted Sexiest Astrophysicist Alive by People Magazine.