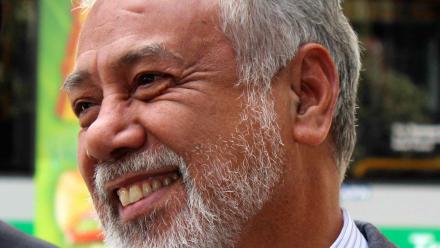 His Excellency Kay Rala Xanana Gusmão is the Minister of Planning and Strategic Investment for the Democratic Republic of Timor-Leste. He has served as President of his country for five years, Prime Minister for seven and a half years and was a central figure in his country’s 24-year struggle for the restoration of independence.

In this public address he will discuss Political Transition and National Unity: The Timor-Leste Story, exploring the lessons of nation building and transition in Australia’s ‘near neighbor to the north’. He will reflect on the ways Timor-Leste’s experience relates to international experience and present his views on how emerging global trends are impacting developing nations and fragile States.

After the address His Excellency will be signing copies of his latest book Raising a Nation: The Speeches of Xanana Gusmão 2011-2014 in the Larry Sitsky Recital Room.

His Excellency Kay Rala Xanana Gusmão is the Minister of Planning and Strategic Investment of the Government of Timor-Leste. Until stepping aside in February 2015 to facilitate a generational leadership transition, he was the Prime Minister of his country for seven and a half years. Prior to this role as Prime Minister he served as the first elected President of the Republic after being sworn in on the 20th of May 2002, the day marking Timor-Leste’s official restoration of independence.

Xanana Gusmão was a central figure in the quest for independence and after the Indonesian occupation began in 1975 he became deeply engaged in the resistance struggle. In 1981 he was elected leader of the Resistance and Commander-in-Chief of the National Liberation Armed Forces of Timor-Leste. He went on to conceive and implement the Policy of National Unity bringing together all to work cooperatively to achieve the goal of national sovereignty.

In November of 1992, after 17 years of active resistance, Kay Rala Xanana Gusmão was captured in the capital Díli and even though imprisoned in Indonesia until September 1999, he continued to lead the struggle to achieve freedom for his people.

On release he returned to see his dream of an independent Timor-Leste realised and turned his efforts to the task of national reconstruction, continuing his life-long work of service to uphold the independence and dignity of the people of Timor-Leste.

Kay Rala Xanana Gusmão has received recognition around the world for his humanitarian work and his role as a champion of peace and reconciliation.

The ST Lee Lecture on Asia and the Pacific was established in 2007 thanks to the generous support of Singaporean businessman and philanthropist Dr ST Lee.

The lecture provides an opportunity for a distinguished figure from the Asia Pacific to speak on developments or trends in the region.