Karliea's journey to ANU and subsequent creative ventures into neo-burlesque and clowning are indicative of a woman who sets her own rules. Karliea says: "I was never ever going to go to University. I was going to drop out in Year 10." Karliea quips that after her mother threatened her with her life, she heeded her wise words: "At the very least, you will try a few weeks of college, maybe even a term, and then we will review the situation".

At the end of her first week at Canberra College, one of Karliea's teachers suggested an Indigenous Cadetship for going to university. She says: "I had never had that sort of encouragement at the school where I had been before. As a child you don't have the understanding that it's on you to come to those conclusions because you look to the adults around you, particularly in a teaching environment, to guide you.

After enjoying a positive schooling experience at Canberra College, Karliea got into ANU to study a Bachelor of Arts and ended up writing her honours thesis on British television comedy: "I wanted to watch TV and get an honours degree for my efforts."

She completed her thesis part time over two years, while working full time at the Department of Education under an Indigenous cadetship. She says that the advantage of having a BA is: "if you have strong critical and analytical skills and can write well you've got a good shot of getting in the door."

Karliea has fond memories of the Tjabal Centre at ANU where she says: "I made great friends and, being Aboriginal, I discovered a lot of family there. It was really nice to have that support. It doesn't matter what happens in any other space of the University, you can go in this space and be with other people who understand what it's like. We are all there to support each other, which is great."

Karliea recalls that, at the time, more could have been done to improve the experience of Indigenous students at ANU who were a long way from home. She says:  "Some of the students who came from the Northern Territory or Western Australia struggled so hard with homesickness and most of them didn't last. It was very sad and indicated to me that there needed to be more support for those students."

Karliea thinks it's important to "set up opportunities to be immersed in the wider Indigenous community and having better connections beyond campus. Know that although you're here, you're still amongst people who will love and support you."

It's clear that Karliea is not afraid to take on new challenges. As an ANU student, Karliea enjoyed scouring the designs at The Darling Sisters, a vintage shop in Gold Creek. During one visit, Karliea was told: "Burlesque classes start in two weeks. The teacher Deb Delicious is an Irish pocket rocket and her boyfriend's a strongman. You'll have a great time."

Given that the Darling sisters had never led Karliea astray with their clothing advice, Karliea decided to give burlesque classes a try. She says: "It changed my life. It changed my relationship with my body and how I saw myself. I owe those two ladies at The Darling Sisters a huge debt of gratitude."

Karliea considers burlesque to be a wonderful vehicle for body confidence: "My body is not a small body and it is not a body that you generally see reflected; not without uncharitable commentary." Karliea describes removing her clothes on stage for the first time and getting a huge cheer as the most liberating moment in her life.  In 2013, she won the audience choice award in the burlesque Kitten of the Year competition.

According to Karliea, burlesque "continues to push boundaries", a description which also applies to her. She has paid for an application to the Berlin Burlesque Festival 2017 and has a plan for her long-service leave from the public service:  "I'll run away and become a clown." She has enrolled at the École Philippe Gaulier, a clown school in France run by the legendary Philippe Gaulier.  She says: "If I don't do it now, I'll never do it and I don't want that for myself."

Karliea would like current ANU students and recent graduates to embrace a fearless attitude as well. She says: "Don't be afraid to question things. Don't just accept that because someone is in a position of power that they're right. Don't follow blindly; it's not worth it. Don't fall into the trap that I fell into which is you go to university and you get a job. Don't be afraid to bust out and try something else."

Who would Karliea nominate to have a building named after at ANU?

"My mum. No one in my life has been a bigger supporter of me, even if that support has not always been in the most obvious form. She raised me so well and I wouldn't be half the woman I am if it wasn't for her. And maybe the Darling Sisters for putting me on the right track." 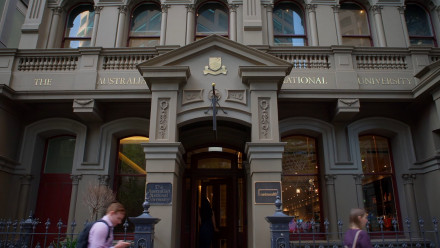