This lifetime task, of learning how to think, is the most important one you can set for yourself. From that, all good things flow - an educated mind, an ethical, truthful existence; a life well-lived.

Dr Gallagher used her speech to outline concerns about western nations and the erosion of human rights in order to protect citizens from terrorism.

She also urged students to use their time at the ANU to become independent and critical thinkers.

“You’ll know you are on the way when you are able to step outside yourself, to honestly interrogate the basis for your opinions and be willing to change them if good and careful thinking reveals them to be faulty,” she said.“This lifetime task, of learning how to think, is the most important one you can set for yourself. From that, all good things flow – an educated mind, an ethical, truthful existence; a life well-lived.”

The ANU Commencement Address marks the start of the academic year at ANU, and is an annual event featuring a high-profile speaker who is invited by students.

Dr Gallagher graduated from ANU with a Master of International Law in 1992, and went on to serve as a Special Advisor to the UN High Commissioner for Human Rights, former President of Ireland Mary Robinson, from 1998 to 2000.

She said a failure to think and engage critically was at the root of the current erosion of important rights in countries, including Australia.

“I think we the people (those are the first three words of the United Nations Charter) … have been careless and unthinking in allowing the gains of the past to be whittled away in the name of some cause or another, like protecting us from terrorism or from having our feelings hurt,” she said.

Dr Gallagher said governments across the Western world, including Australia, have decided basic human rights, set out in the Universal Declaration of Human Rights, can be scaled back.

“I’m pretty sure that this is not what the drafters of the Universal Declaration had in mind.” 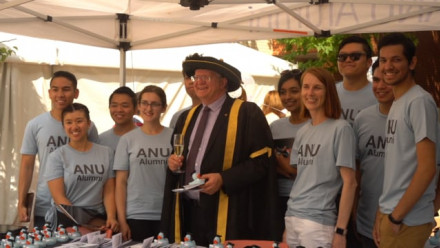