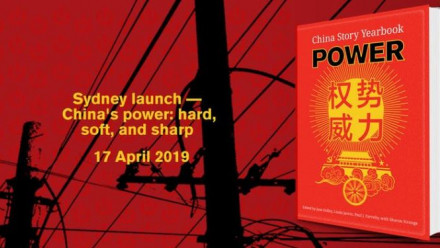 In 2018, the People's Republic of China (PRC) was more powerful than at any other time in its modern history and one of the most powerful countries in the world. The China Story Yearbook: Power surveys the various ways in which the Party-state wields its hard, soft, and sharp power, both in China and abroad. Citizens of the PRC have long had to negotiate the state's power and influence in their life. Increasingly, diaspora communities and non-Chinese citizens, companies and governments around the world are learning to do the same. Some submit, some push back.

Jane Golley and Linda Jaivin, two of the book's co-editors, will be joined by two of the book's contributing authors, David Brophy and James Reilly, to discuss 'Girl Power', soft culture, the debate surrounding Chinese influence in Australia, China's economic statecraft in North Korea and more.

The Yearbook: Power will be launched by Dr Geoff Raby, Chairman and CEO of Geoff Raby & Associates, Former Australia's Ambassador to China (2007-2011).

The China Story Yearbook: Power is available for purchase at a discounted price of $20 (RRP$45) at the book launch. All proceeds will go towards funding the next Yearbook.