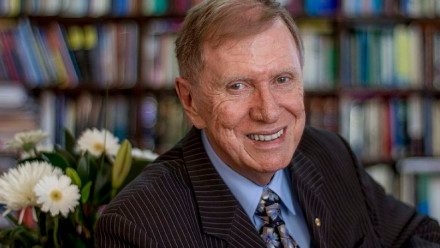 Registration for this event have now closed.

Have you had dinner at the State Library before? Hosted by ANU Chancellor Professor the Hon Gareth Evans AC QC in his very last Gala Dinner as Chancellor, the evening will feature our special guest speaker the Hon Michael Kirby AC CMG. Enjoy drinks and canapes on arrival, a three course curated dinner and drinks package on the night.

Rub shoulders with ANU heavyweights, flying in to celebrate the Chancellor's tenure. The Gala Dinner also bring together Victoria-based alumni to re-connect with former classmates, meet other members of the Melbourne alumni community, and farewell the Chancellor in person. Don't miss out on this opportunity to join other ANU alumni and hear from two eminent speakers in the iconic State Library Victoria.

Dr Michael Kirby HonLLD '04 retired from the High Court of Australia in 2009 as Australia's longest serving judge. He was awarded an Honorary Doctorate of Laws from ANU in 2004.

Following his judicial retirement, Michael Kirby was elected President of the Institute of Arbitrators & Mediators Australia from 2009-2010. He served as a Board Member of the Australian Centre for International Commercial Arbitration (2009-14). He has been appointed Honorary Visiting Professor by twelve universities. And he participates regularly in many local and international conferences and meetings. He has been awarded a number of honorary doctorates at home and abroad. He is currently the Editor-in-Chief of The Laws of Australia.