» About » Campuses & facilities » Events » Aboriginal electoral power in the Northern Territory: Reality and potential viewed from the 2019 Federal election

Aboriginal electoral power in the Northern Territory: Reality and potential viewed from the 2019 Federal election 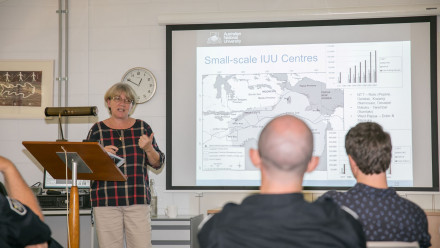 This seminar reviews past work on Aboriginal voting and enrolment in remote north Australia from a perspective after the 2019 Federal election. Compared to regional Queensland and Western Australia, a higher proportion of Aboriginal voters probably accounts for the Northern Territory being more strongly Labor in recent Federal elections. This suggests Aboriginal electoral power as a current reality, particularly in the House of Representatives division of Lingiari.

Enrolment and turnout measures in Lingiari and other northern divisions for the House of Representatives suggest a different story. Being low, these measures raise the possibility of Aboriginal electoral power that is under-utilised and still has untapped potential. Low enrolment and turnout figures will be related to aspects of electoral administration related to Aboriginal people in remote areas, both historical and contemporary. These suggest that moving towards compulsory voting for Aboriginal people in remote areas is still a challenging ongoing project.

Will Sanders was involved in ANU research work on Aboriginal voting in the Northern Territory at the time of the 1984 Federal election, the first in which both enrolment and voting were compulsory for Aboriginal Australians over 18, as for others. He returns to this topic after three and half more decades of experience, both at the ANU and of Aboriginal voting and electoral administration.

Will is a Senior Fellow at the ANU's Centre for Aboriginal Economic Policy Research, where he has been a member of staff since 1993. Will was a research assistant on the staff on the ANU's North Australia Research Unit in Darwin in 1981 and 1982.